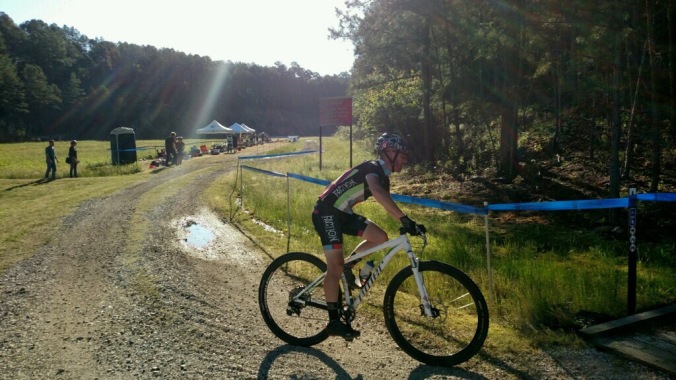 I trained quite a bit harder this year, and I decided to make Marathon Nats an early season “A” race. It had rained hardcore leading right up to the race weekend, and by hardcore, I mean rain categorized by the “localized flooding” variety. I was able to sneak down early Friday for some pre-riding and found the course to have some mud in places, but in overall great shape for the deluge that had happened.

I messed around with tire pressures and shock pressure during the pre-ride and even caught a glimpse of Todd Wells screaming by at mach 1…on a pre-ride. I met a ton of other people from other states out on the course, and then met even more people back at the trailhead that were just passing through and wanted to check out the trail system. “Pretty cool,” I thought, especially for little ole Arkadelphia, AR.

I got back to the course the next day around 4 for packet pick-up and then a racer briefing at 6. The briefing was basically a run down of the course, an introduction of the USAC officials, and a round of applause for the oldest rider, who was 84. It’s good to know that I’m only halfway into my race career when there’s still 84 year old’s out there kicking ass. I shook a few hands, grabbed my timing chip, and decided to head back to the hotel for an early night.

I ended up grabbing a  pizza on the way to the hotel and a few Clif bars for breakfast. My hotel was basically on the shoulder of I-30. I honestly could of under handed a baseball out into the north bound lanes of traffic. I ate, watched some hockey, and rigged the AC so that the fan would continuously run and diminish the road noise.

5:00 am comes quickly and I run across the street to Mc D’s for a large coffee. I get back and make 5 bottles of Tailwind Greentea Buzz, loaded with 300 calories each and load 2 different coolers with them. I’d talked 2 friends into working the 2 seperate feed zones for me, and this is going to make hydration and nutrition pretty painless. I’ll be able to get a fresh bottle every hour and have no issues with the bonk monster.

The Pro-Open was the first race of the day and they made quite a spectacle of it. Several got call-ups and then the rest of us filtered in behind. I got to meet Jacob Dylan, who is tearing up the NUE scene, with his coming-out-of-nowhere win last year at Cohutta.

Race start was fast and frantic, followed by an immediate up hill that saw us climbing at 20 mph. The first 2.5 miles were going to be on pavement, so I knew the pace was going to be high. We climbed at 20mph and started gathering into pacelines for the flat and the downhill to come. We ended up all spinning out on the downhill and approached the hard right hander onto double track that would lead us into the trail system. This is where it started to string out, as the doubletrack immediately went uphill. The climb was easy and eventually I found myself with a group of about 10. The race had already gone up the road with Todd Wells and Jeremiah Bishop totally nailing it up the climb.  I was fine to settle into the rhythm with a small group. We popped out back onto some gravel and made our way by the feed zone and pit by the start/finish area. We took a hard left onto the trail system and once again, climbed for a bit. I know all these trails quite well, as I’ve ridden them for several years and had put a ton of training time into them in the months leading up to the race. I passed a guy that already had a mechanical and told the guy in front of me to pull harder up the hill…he yielded out of the way and dug in to get away from the group. Four guys came with me and we made our way to the first enduro-type downhill section, where some recovery would take place and some fun of screaming down the hill and railing through the berms. This was all uneventful other than seeing about 4 pair of Oakleys that had flown off heads scattered on the side of the trail.

We popped out onto some pavement, took a swig from the bottles, and pacelined up to the next section of trail. This next section starts with a sustained climb of a couple of miles, that is always a ball buster. The first time up we were flying, but the next time on the second loop….well, not so much.

We top out, cross a road, and then back into a long winding down hill, where you can go mach 1 and make up some time. I drained my bottle and settled in for the spinfest. One of the feed zones was coming up at the end of this section and I was happy that I suddenly realized that I was alone, and wouldn’t have to worry about other riders around me when I took my feed.

I snagged my bottle in the feed zone and continued on. It appeared that attrition was starting to take its toll, as there were several people fixing flats and walking their broken bikes back to the nearest road. I ended up catching another guy and we rode together for the rest of the first lap. Just prior to entering the last section of singletrack that would lead to the start/finish line, I caught a glimpse of the leaders already heading back out for their second lap, man those guys were flying!

I popped out off the trail and headed to the finish line for another feed and lap 2. The feedzone was a sea of faces, all looking for their rider. I saw my buddy, ditched my old bottle, and grabbed a fresh one. I took a sharp left back onto the trail and started climbing up. I saw some friends near the top of the climb and they took some great photos of me. I was once again alone and would be this way for the next 45 mins or so.

The next 8 miles were uneventful. I felt good and hadn’t had any mechanical mishaps, which I would later find out that I was one of the few that didn’t. Lots of sliced tires, munched derailleurs, and broken chains. I eventually came out back on top of Iron Mtn and prepared for the enduro-esque descent back to the far feed station.

I grabbed my last bottle, appreciated the words of encouragement from my friends, and headed out for the last 9 miles until the finish. I could feel some fatigue setting in, and as I let my mind wander, I washed out my front tire and found myself on the ground. No harm done, but I cursed myself for losing focus and making a stupid mistake. With 6 miles left to go, the 2 female leader came screaming by. I rode a wheel a bit, but the pace they were keeping was beyond me. I drifted back to enjoy my solo ride back to the finish. I’d realized that I was getting closer to the finish and was wondering how I was going to place. There were 30 starters and I knew several had dropped out, and there was a possibility that I might even beat a few of them. I got passed by a couple of young age groupers and approached the final leg of single track. Fatigue was coming on with a quickness up the last hill, but I pedaled on, knowing that a nice, fast descent would take me almost all the way to the finish.

Then came the best part of the whole race. I was riding through the finishing corral and right when I hit the line, the announcer said, “Here’s another one of our pro’s finishing up. Brent Findlay from Little Rock, Arkansas!” Big, big smile.