Two days of racing CX at Shelby Farms in Memphis, TN, started out with me returning from Starbucks at 5:30 am and trying to catch the hotel door before it slammed.

It only hurt for about 2 hours, and it just had to be my shifting hand didn’t it?

My race was at 9:15 and I needed to pre-ride, so I got to the venue about 8. I’d went to packet pick up the night before, but needed to grab my timing chip as well. Shelby Farms Park is a large park on the east side of Memphis. So large in fact, that I had to stop and google the location, once inside the park. Location found and I rolled up to registration.

On the way to the tent, you could make out some log obstacles, the barriers, and the huge run-up/fly-over. The later being rather intimidating in it’s size and steepness of the stairs. (I’d later find out that the steps had a 12″ rise to increase the amount of difficulty.) Timing chip in hand, I went back to chamois up.

I was able to take a full lap before the start of the junior race and was glad that I did. The run-up was just as steep as it looked, and on the backside there was a sand pit about a quarter of a mile long, that was really loose. The logs and barriers were normal CX stuff, and the approaches made them not very difficult. 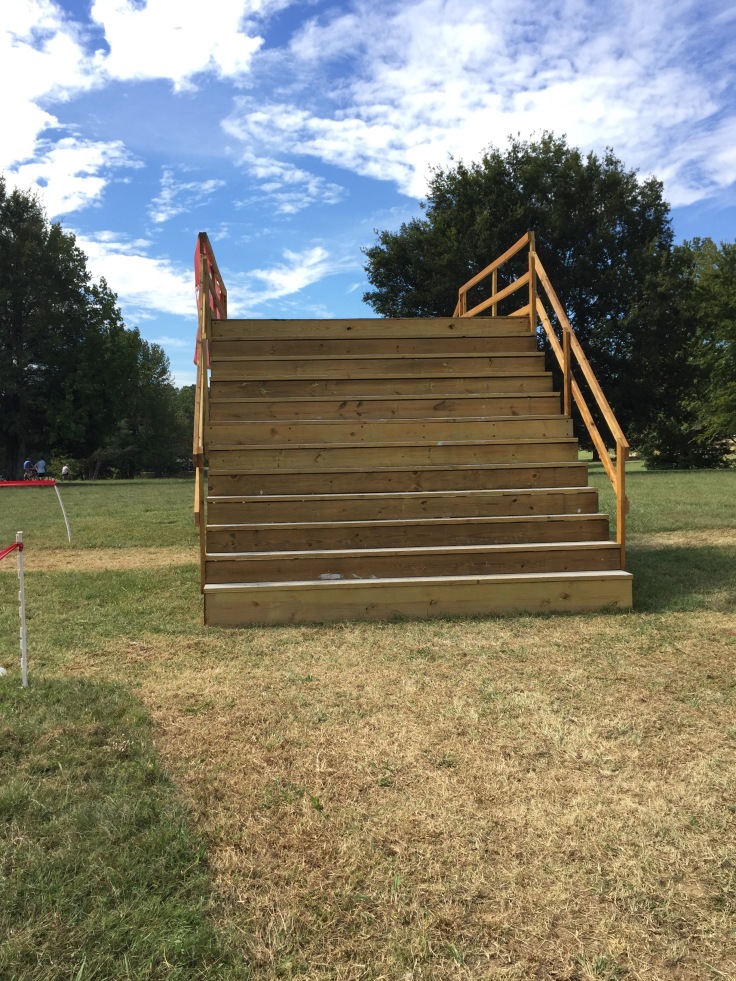 I continued to warm up and then went to cheer on the Jr’s for their final laps. The Jr’s finished, the course was announced as clear, and I took off for another lap.  I stopped to reduce my tire psi, and then went down to the start…where it was a cluster fuck. The 4’s, 5’s, single speeders, master 45+, and master 55+ were all going to start en masse. There were about 60+ people ready to go apeshit on the whistle. They called the single speeds to the front, followed by the masters, and then the 4/5’s.

I knock 2 or 3 people out of the way, scream at 3 more, and approach the hard right hander onto the grass. I go wide and let a guy find out how deep the gravel is…he learns that gravity is well in control of his bike and he tumbles down. We start winding our way around trees, I’m passing a shit ton of people, and we make the approach to the run-up/fly-over. I’m dreading this first time as there are way too many people around me. I dismount and suitcase my bike up the first time. I remount at the top and pass 4 or so more people on the steep ramp off the back of the run-up. Some more off camber turns, a little up and down, and we hit the barriers. No one falls and that’s good. Some more tight turns, we double back for a bit, and then a hard right hander with a log run-up. I’m up and remounted. A little down hill and I’m hitting the power. I catch about 4 guys and we all run together into the sand pit, which is deep and fresh, so the sand goes everywhere and you sink down in. “Can’t wait to do that 5 more times,” I tell myself. Another slight descent a turn or two, and the last obstacle before I finish lap one.

All told, I raced pretty good, Tire pressure was good, I slid a bit once on a bumpy corner, and I clipped enough of my foot on a barrier to know that I almost went down and that I shouldn’t do that again.

In the gaggle of people, I finish 7th. A hard effort for 7th place, but there ended up being 33 guys in my field alone. My start sucked, and that’s what I focused on day 2.

I’m up early again ad decide not to slam my hand in the door. My race is at 9:15 again, and as luck would have it, the hotel checkout time was noon. Plenty of time to race, come back for my stuff, grab a quick shower, and still make it back to see the fast cats.

Day 2 starts of the same way, but there are a ton of new faces at the start. Shit…fresh legs to race against. The whistle blows and I’m banging bars and screaming at people to pedal or get out of the way. I hit the first corner top 10. Now we’re racing. Shit was fast and I only got passed by one other guy the whole race. The selection was made in the first 100 feet of the race. Power, power, power, and by the start of the 3rd lap, there’s no one behind me. I pass a few more people, have a nice battle with the same guy that I did the day before, and he pips me at the line. He’s 5th, I’m 6th. Shhhhheit, 6th? I wonder over to the result board ( actively updated upon finishing! oh technology). While I’m waiting for the results to post up, I look at my garmin: Average speed 1 mph faster than the last race, time was 4 mins faster, and power was 10% higher. Once again, a hard ass race for…yep, 6th place.  I high fived my new friend Wes and went to spin down, grab a water, and give myself a hard time.

The race and the venue were fantastic. It was very easy to get to and the vicinity was riddled with hotels. This ended up being a regional race, with people coming from the surrounding states, GA, FL, and NC. This is what made the field so strong, and honestly, it was a great test to get away from the “normal” people that you see at every local race. I’ll be back next year to give it hell again, and maybe with some good legs, be racing cat 3 or hell, maybe 2? Time will tell. Vittoria XG Pro 33’s set up tubeless: 25 psi front / 28 psi rear. This was about the lower limit on psi that I’d go, due to some rolling and sketchy moments.

Some raced with bottles, I didn’t and I was fine. Pre-race bottle was Tailwind Green Tea Buzz. Post-race was Tailwind Mandarin Orange and some pedialyte.

No mechanical issues or mis-shifts, but I went through every bolt nightly and lubed accordingly. I raced in shorts and a jersey, and will invest in a skin suit soon.

Many thanks to Tailwind Nutrition for making the best endurance fuel on the planet.