No, I didn’t hear it break.

This has been a popular question, posed by many different people over the past week. I guess many actually do, which made me rethink the crash, but I still don’t remember a snap or crack.

What I do remember in the nanosecond that I’m hurtling through the air though, was my brain wondering what the hell I’d hit? Then it was a rapid checklist: you’re going in headfirst at a steep angle…twist, don’t stretch out your arms, try to roll…

I landed squarely on my right shoulder with a thud. There was no bounce or recoil that I remember, but there was a quick thought of, “fuck, that hurt.” I was in a race after all, so as soon as I saw the guy that I was attempting to pass before being airborne, I jump up, straighten the bars on my bike, and start to chase.

I ride like hell for about 30 feet before my body lets me know that it isn’t happy one bit. I push back, pleading that the shoulder hurts because I rammed it into the ground, and to keep pedaling. My body then hits me with a lightening bolt of pain, followed by a surge of nausea, and I know that the race is over for today. I slow to a crawl, and pedal back up the hill to the start. No one has seen the crash, as it was down a hill and out of their line of sight.

There were a few asking if I had a mechanical, or if I wasn’t feeling it, but the tell-tale was the sleeve of my skin suit. They peel me out of the skin suit, and it doesn’t take anyone with medical knowledge to realize that there was a drastic difference in the appearance of the two shoulders. 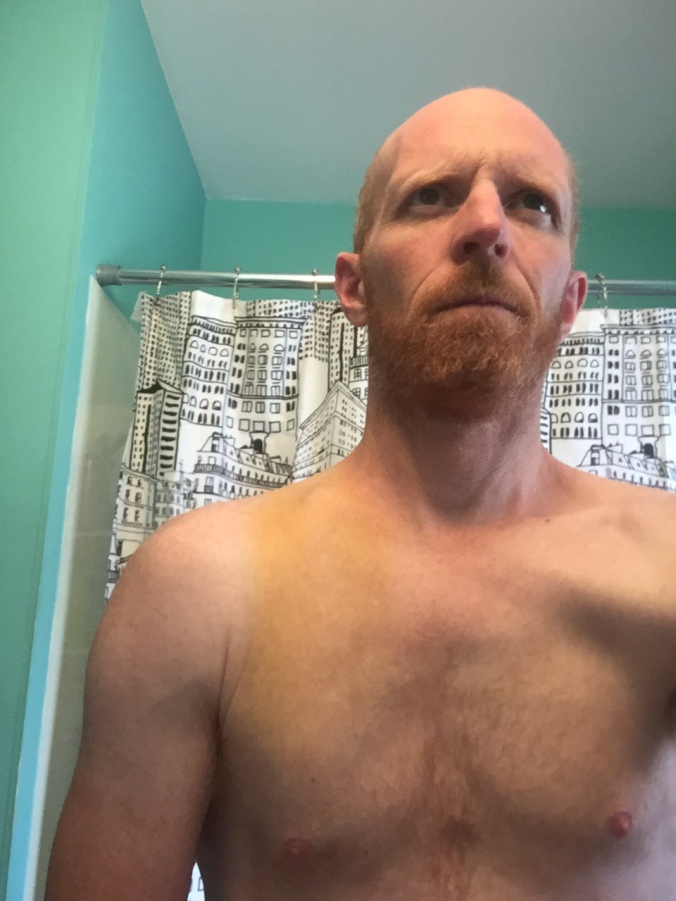 I’m in good hands, as there are 2 doctors in attendance, and one actually has a sling in their car. I put the sling on, sit down to formalize a plan, and watch my friends collect my things ( I’ve got an acre of stuff: chairs, tools, 2 gear bags, bike wheels, bikes, coolers, a pop-up canopy, etc.)

The one thing that strikes me about this whole situation, is that I’m 46 years old, and this is the first time in my life that I’ve needed to visit the ER. Yes my streak has ended, but I must of done something right throughout those years to have avoided needing urgent medical attention until today. Right?

The car is loaded, and I climb into the passenger side. I shut the door and realize that I can’t put my seat belt on by myself. I open the door, yell for a friend, and they come and square me away. I’ve been injured 20 minutes, and it’s already proving to be a pain in the ass. The dogs and bikes are dropped off at home, I change out of my cycling kit, and we drive the 3 miles to the nearest hospital. Finding the ER is comical, as the hospital is the size of a small country, and we’re forced to follow the signs emblazoned “EMERGENCY.”

It’s 1 PM on a Sunday, and find the Emergency Room quiet and almost deserted, something that I didn’t think ever happened at a very large inner-city hospital. I continue to be amazed for the next 2 hours, as I never have to sit down and wait for anything. I’m taken to a room immediately. The resident sees me, and agrees with me that yes, something is indeed broken. I’m taken to have x-rays, I come back to a nurse offering morphine, another resident, then the attending, and then the ortho attending. I’m floored with the level of care that I’ve received in a rather short period of time. I’m given some pain meds, a new sling, and an appointment to see an Orthopedic Surgeon on Wednesday.